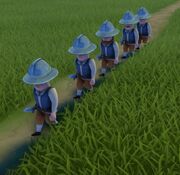 Soldiers can be assigned to the Wooden Keep and Lord Manor.

Up to ten Soldiers can be garrisoned at the Keep and one Soldier per Treasury component within the Manor.

Having Soldiers employed allows the player to complete missions, which are sent requested on behalf of the Fealty. Mission prompts will appear regurarly. As of the current build (1.0.7.0207), there is no other function for Soldiers. They spend their time fulfilling their needs, standing guard, patrolling the estate and using Training Dummies. 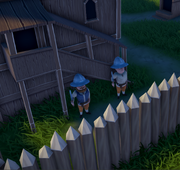 There are three classes of troops: novices, soldiers and knights. They are promoted like other inhabitants, and each subsequent class needs more food and goods (see Vilagers). The promotion only becomes availiable when the proper conditions are met (present needs fulfilled) They level up to a maximum of 6 by going to battle and surviving.

Soldiers can be equipped with a sword or a spear. This strongly determines their strength, see the table below. Swords can be made at the weaponsmith. Spears can only be found on missions with the level "extremely difficult". All troops start without weapon; they must be assigned from the Military Manager screen under the tab "Army". Troops send out without a weapon have as good as no strength and will almost certainly die.

Soldiers can be untrained, partly trained, mostly trained or fully trained. They need Training Dummies in the keep to get better trained. Their strength depends on their training level, and because it only costs a few dummies and some time it's wise to send them out only fully trained. 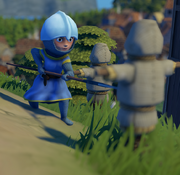 When send out to battle troops can get wounded or even die. It takes time to recover the wounded. The Officinal Garden Masterpiece reduces that time by a factor 2. When wounded they're half their trained strength.